Wood in Renovation and New Construction

Wood is on the up again in Spain. If it’s on the up then in must have been down? It was, and for very good reasons. Anyone who has purchased and renovated an old, traditional stone and timber house will most likely tell stories about the problems they had with beams and general woodwork.

When many of these old houses were built, the only supply of lumber came from surrounding trees, mainly pine. For use inside and out, they simply cut down a tree, maybe shaped it a bit and then put it in place. None of the timber was treated. Of course it eventually succumbed to pest infestation and dry-rot, a fungal condition affecting the structural integrity of timber. Bricks and mortar, concrete and prefabricated materials replaced the traditional labour intensive use of stone. Timber faded into the twilight because of its bad reputation. It’s understandable why this happened. But in a sense they threw the baby out with the bathwater as good quality treated timber began to appear on the market, ideal for replacement in renovation or new construction. But because demand was limited in Spain it proved expensive, a kind of catch 22 scenario – ‘I want to use timber but it’s too costly.’ – ‘Unless demand increases it will remain so.’ Thankfully we are past this point, and quality, fully treated wood is freely available at reasonable prices.

Now back to houses again. Modern built villas and houses are constructed with a concrete slab ceiling onto which the pitch roof is built with brick risers, terracotta type boards, render and finally roof tiles. The whole thing is incredibly heavy, many, many tons. Spain is considered an earthquake zone and the belief is that using concrete will lesson the chance of collapse. I don’t subscribe to this theory; my stone and timber house is over a hundred years old and has survived many earthquakes unscathed. But in the unlikely event of a roof caving in during an earthquake, what would you rather fall on you, tiles and timbers or forty tons of concrete? Concrete structures do fail; one only has to watch the news to know this. Now that quality timber is treated against damaging insects, dry-rot and the elements, there’s no excuse for not using wood for renovation or new construction. Many builders are now using wooden A frames, joists, floors and even ceilings in their new houses.

Employ a reputable, professional carpenter and joiner to undertake the work and compare prices with the alternative – you’ll be pleasantly surprised. Woodworks Direct, based inland from Alicante, meet the above criteria, priding themselves on quality materials and workmanship at very competitive prices. So, whether renovating an old house or having a new one built, think wood. 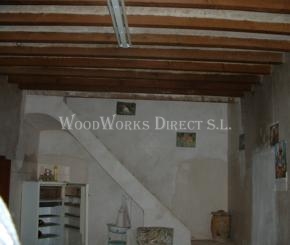 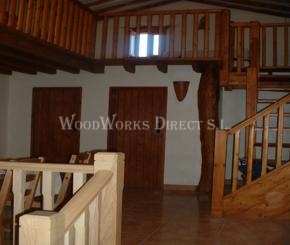 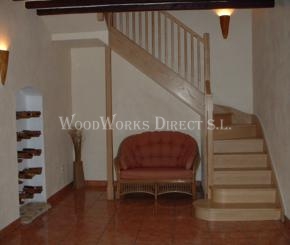 Add more space to your home without the mess!

Why choose our all in one EPDM rubber system?

Make a Gazebo a Focal point in your Garden

Discover the Wonder of Wood

If you have any questions…